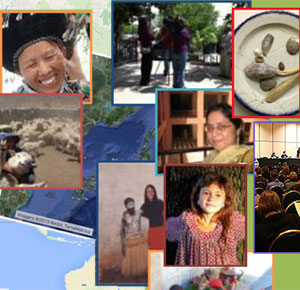 Use our interactive search tool to find out about the work anthropologists do around the globe.

Judith Williams Judith Williams is a Ph.D. Candidate in sociocultural anthropology. A former chef and caterer, her research interests involve food labor, racial hierarchy, colorism, and the negotiation of racial inequalities. Her dissertation will explore the practices, traditions and socio-cultural beliefs, that reproduce and justify continued anti-black discrimination, within Miami’s restaurant industry, as well as the ways in which this discrimination is resisted and contested. Judith is a McKnight doctoral fellow and holds a master’s degree in Hospitality Management. Prior to pursuing her PhD, she was a Chef instructor at FIU’s Chaplin School of Hospitality Management.

Walter Little Walter E. Little is the author of nine books and edited volumes and has published over 90 articles and reviews. His monograph, Mayas in the Marketplace: Tourism, Globalization, and Cultural Identity (Texas, 2004), won Best Book of 2005 from the New England Council for Latin American Studies and his co-edited volume, Street Economies in the Urban Global South (SAR, 2013) won the Society for the Anthropology of Work Book Prize in 2014. Dr. Little was raised on a farm near Logansport, Indiana. Upon getting a BA in journalism at Roosevelt University in Chicago in 1987, he spent the following two years working in Central America and traveling over land to Lake Titicaca, after which he returned to Chicago where he earned an MA in anthropology at the University of Illinois, Chicago. He completed his PhD in cultural anthropology at University of Illinois, Urbana-Champaign. He is a cultural anthropologist at the University at Albany, SUNY, who studies the socio-economic and political lives of Mesoamericans. His multi-sited ethnographic research in Guatemala and Mexico aims to understand heritage and tourism practices in urban places with attention to identity politics and handicrafts sales to tourists. His research explores Kaqchikel and K'iche' Mayas' livelihoods as artisans and vendors in urban heritage sites, as a way to learn how about socio-economic mobility and the creative ways in which Mayas have made do and, even, thrived in a political system that has long discriminated against them.

Chingchai Methaphat I am a medical anthropologist, with the background in nursing and public health.

Tara Lumpkin Tara is the founder of Voices for Biodiversity, a nonprofit project that uses the art of nonfiction storytelling to build a diverse story-sharing community to save biodiversity. In addition, she is an environmental and medical anthropologist who has worked as an international development consultant for the United Nations Children’s Fund, the United States Agency for International Development, and various nongovernmental organizations. Prior to her international work, Tara interned with High Country News, an environmental newspaper and was a professor in the Writing and Media at Loyola University in Baltimore, MD. She has published poetry, fiction, and nonfiction, as well as having won more than half a dozen writing prizes, fellowships, and grants. Tara currently is at work on Throwing the Bones, an eco-memoir.

Linda Hall Linda Jean Hall, a retired Information Technology Engineer, now is an engaged anthropologist dedicated to serving the tangible educational needs of future generations. The first steps towards a new future were taken in 2005 when she traveled to visit friends in Ecuador and began taking classes that led to the completion of a bachelor’s degree in Spanish at UCSB. Concurrently, she collaborated with Savannah Brogdan, a childhood friend, to self-publish a memoir of their life- experiences from 1948-1966 entitled Three Rivers Crossed. In order to achieve the goal to become a professor, Linda completed a Ph.D. in Cultural Anthropology at UCR, two MAs at UCSB; one degree in Latin American and Iberian Studies (2010) and another Master’s in Anthropology (2014). Currently, Linda is a lecturer at UCLA in Chicana/o Studies and a part-time researcher. She specializes in bringing to the forefront the lived experiences of Afro and Latino diasporic and previously ignored groups. Her area of specialization is the immigration of US Ecuadorian migrants of all ethnicities to the U.S.

Dmitry Bondarenko I graduated with the M.A. degree cum laude in 1990 from the Moscow State University, Department of Ethnography, School of History. I completed my Ph.D. in 1993 and D.Sc. in 2000 at the Russian Academy of Sciences. At present, I am Vice-Director for Research of the Institute for African Studies of the Russian Academy of Sciences, Director of the Inrternational Center of Anthropology of the National Research University Higher School of Economics, and Full Professor with the Center of Social Anthropology of the Russian State University for the Humanities. In the past, I was a visiting scholar with the Program of African Studies of Northwestern University (Evanston, USA), Institut fuer Geschichte (Goettingen, Germany), and Maison des sciences de l'homme (Paris, France). I have lectured at universities of Russia, the USA, Egypt, Tanzania, Slovenia, and Angola. I have conducted field research in a number of African countries (Tanzania, Nigeria, Benin, Rwanda, Zambia, Uganda) and among Black people in Russia and the USA.
Tweets by @ThisIsAnthro