In This Section
Home | Connect with AAA
Lisa Anderson-Levy 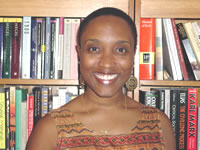 Anderson-Lev’s dissertation, Hiding in the Open: Making Visible the Practices of Raced Identity in Jamaica explores the question of race. She writes, “Two life experiences stand out as transformational in terms of the effects each has had not simply on my life but also on my intellectual development and my development as a professional. The first of these was emigrating to the United States where for the first time in my life I was confronted with overt racism and hegemonic whiteness because growing up in Jamaica meant that I was part of the “majority.” The second has been the experiences of having two children during graduate school. The experience of being a black woman and the mother of black children in the United States continues to be immensely influential in molding my interests in identity production. I find the paradox of the apparent invisibility of oppression and the visceral responses it evokes as it interacts with various aspect of identity endlessly fascinating.”

This fascination with the complex operation/deployment of racial identity began as an undergraduate when she interned as a diversity counselor. The student population at the state institution she attended was 98 percent white and was situated in a small, predominantly white community. This experience led to an intense awareness of the ways in which white hegemony (re)produces itself through oftentimes subtle re-enforcements of white cultural and racial superiority. Anderson-Levy writes, “During this time I began a serious scholarly engagement with the relationships among gender, power, class and race. I discovered that the anti-racist work which treated whiteness and non-whiteness as completely separate phenomena is wrong-headed because these categories are mutually constitutive.”

The dissertation explores questions of race-particularly of whiteness by asking questions such as: What constitutes whiteness? Who is white and under what circumstances? What makes a person not white or un-white? She notes, “White cultural and social mores will continue to be hegemonic until there is a serious and sustained inquiry into the processes through which the category, white is constructed. I see my work as beginning a different conversation about race; one which seeks to de-center whiteness, as it exists in contemporary US racial politics, by looking at alternate constructions of whiteness which have differing understandings of the constitution of whiteness.”

Anderson-Levy is particularly interested in how people (re)create themselves through daily practices and sees her work as uniquely positioned to contribute to the discipline of anthropology in fundamental ways. By focusing her inquiry on race, she poses difficult questions for the discipline.