In This Section
Home | Connect with AAA
Russell Rodriguez 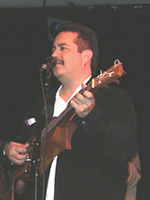 Russell Rodríguez was the recipient of the 2005-06 AAA Minority Dissertation Fellowship. Rodríguez, University of California, Santa Cruz,  earned a B.S. in Anthropology at Santa Clara University in 1994 and an M.A. in Latin American Studies at Stanford University in 1996.

Rodríguez’ dissertation, The Legitmization of Mariachi: Mariachi Music in the United States, “examines the recent developments of the transnational cultural expression of mariachi music within the last 30 years.” An accomplished mariachi musician in his own right, Rodríguez is especially interested in the transformation of practice and performance that generates within the different spaces and network of mariachi musicians. His ethnographic research, based in Austin, TX, Los Angeles, CA, and Guadalajara, Mexico, “explores how mariachi music has moved into new and diverse public spaces within the United States – theaters, institutions, cultural centers, politics – and the various changes that have become increasingly evident because of this shift. First and foremost among these changes is the shift from the “traditional” manner of learning to perform mariachi music, i.e., apprenticeship, to the institutionalization of learning, i.e., school curriculum and mariachi conferences. Another significant change concerns the diversification of mariachi practitioners in terms of gender, ethnicity, and class.”

During the course of his experience as both a practicing musician and a researcher, Rodríguez has collaborated with musicians from Mexico and the United States whose work experiences range from small local groups to internationally known ensembles such as Mariachi Vargas de Tecalitlán, Mariachi Los Camperos, in addition to Chicano musicians from Los Lobos and Quetzal, and worked with cultural studies experts Renato Rosaldo and Olga Nájera Ramírez. Together these influences have had a discernible effect on his interpretation of both the theoretical and practical concerns related to understanding the transnational network of mariachi music and musicians.