In This Section
Home | Connect with AAA
Shedra Amy Snipes 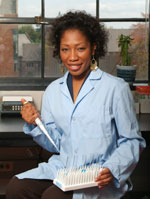 Snipes’ research involved studying aspect of the environment and health through a cultural lens. She is particularly interested in exploring the environment and health among Mexican and Mexican-immigrant populations. She began work as a graduate student researcher with Dr. Beti Thompson on a National Institutes of Health (NIH) study entitled “For Healthy Kids: Reducing Pesticide Exposure in Children of Farmworkers.” The goal of that project was to reduce the take-home pathway between farmworkers and their children through culturally appropriate, community-based interventions. As part of her training, she assisted with designing questionnaires, training local (Yakima Valley of Washington State) bilingual (Spanish and English) interviewers on how to approach households, conduct interviews, collect bio-specimens from farmworkers and their children, and track survey outcomes using a community-based approach.

Amy has continued this work through her dissertation, Pesticides and Cortisol Increase among Mexican Immigrant Farmworkers in Washington State: A Bio-Cultural Model, which investigates cultural belief and practices related to organophosphate (OP) pesticide exposure and assesses the relationship between OP pesticide exposure and cortisol levels, controlling for the effect of psychological stress. Psychological stresses is measured through a stress scale developed by Ms. Snipes and validated to measure Mexican immigrant farmworkers’ stress in a culturally-appropriate manner.

Her research is based on two hypotheses: 10 there will be a direct association between cultural beliefs and practices, pesticide exposure, and self-protective behaviors. Because self-protective behaviors impact pesticide exposure, culture will act as an influence on both and 2) there will be a positive association between urinary metabolites of OP pesticides and salivary cortisol levels measured during the pesticide spray season vs. the pesticide non-spray season. She theorizes that culture will impact this association through its affect on self-protective behaviors and overall exposure. She believes that this work will “contribute to the areas of anthropology, environmental health, ethno-psychology and psychology by providing additional, culture-centered ways to study health.” She adds, “…the examination of bio-markers of stress (cortisol) will be of great value to the scientific community due to an aim to study stress and its endocrine indicators in ethnically diverse populations.

Snipes’ research experience extends beyond Washington’s rural communities into urban centers of Seattle, WA where she has worked in local efforts to improve ad promote men’s health. She partnered with urologist, Dr. Richard Pelman, to tailor a men’s health guide to be more readable and culturally-appropriate for a divers group of men. This work led to a larger effort involving Genie Industries, inc, one of the largest producers of construction materials in the world, to explore health perspectives and work safety behaviors among its employees. The goal of this project is to understand knowledge, beliefs and behaviors impact health decision-making at all levels of corporate structure as a means to improve health education and overall health of employees, decrease onsite accidents, lower insurance claims and increase job satisfaction. This work is on-going and has led to the formation of two, fully funded multi-year research assistantships for other anthropology graduate students at the University of Washington.