Racism in the Academy: the new millennium - Learn and Teach Skip to content

Racism in the Academy: the new millennium

The starting point for this study was through the auspices of our professional scholarly society, the American Anthropological Association. In 2007, then-president Alan Goodman appointed a commission charged with two primary responsibilities:

"(1) to collect information in order to better expose how privilege has been maintained in anthropology and the AAA, including but not limited to departments and the academic pipeline and

(2) to develop a comprehensive plan for the Association and for the field of anthropology to increase the ethnic, racial, gender and class diversity of the discipline and organization."

Many of the responsibilities about investigating and mapping the field of anthropology and the role of the Association were discharged with the publication of the Commission's Final Report in 2010. However, we are anthropologists and we found ourselves wanting to bring the anthropological lens to another kind of project, an ethnography—the systematic description of human culture—of the academy, to more fully describe the lived experiences of racism in colleges and universities. Thus Audrey Smedley and Janis Faye Hutchinson, two members of the commission, found themselves organizing additional findings in a volume entitled, RACISM IN THE ACADEMY: The New Millennium. 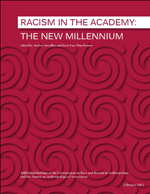 Racism in the Academy: Toward a Multi-Methodological Agenda for Anthropological Engagement by Faye V. Harrison

A Black Woman's Ordeal in White Universities by Audrey Smedley

I Will Make Allowances for Your Creativity by Maria Inez Winfield

Racism in the Academy: Ideology, Practice, and Ambiguity by George Clement Bond

Sexism and Racism in Academe: Why the Struggle Must Continue by Cheryl Mwaria

"He Fit the Description": Prejudice and Pain in Progressive Communities by J. Lorand Matory

Negotiating Racism in the Academy by Arthur K. Spears