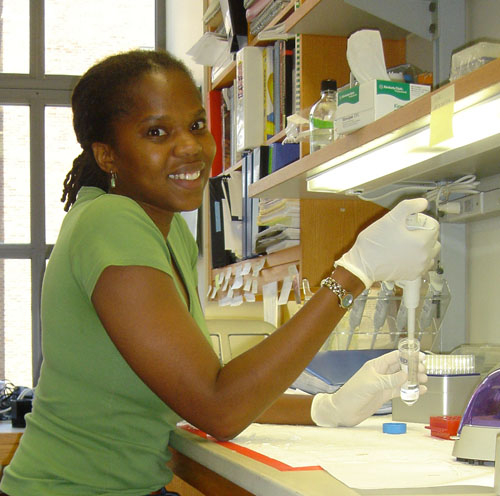 AAA and the Committee on Minority Issues in Anthropology (CMIA) are pleased to announce the selection of Felicia Gomez as recipient of the 2010–11 AAA Minority Dissertation Fellowship. Her dissertation is titled “Genetic Variation at the ICAM-1  + CD36 loci in Diverse Human Populations” and Alison Brooks and Sarah Tishkoff are co-chairs of her committee. Gomez received her BA in biology and anthropology from Skidmore College and an MPhil in human evolutionary biology from George Washington University, where she is now a doctoral candidate. Following her graduation from college, Gomez worked as a senior laboratory technician at the New York State Department of Public Health, where genetic techniques were used to track foodborne illness across New York State. Gomez says:

“In this position I began to wonder how disease has influenced human evolution. In the lab I saw that disease is a fundamental part of the human experience and I began to question the impact of disease on human evolutionary history.”

For her doctoral work Gomez has chosen a project that reflects her interdisciplinary interests. She studies modern human genetic variation of genes that may play a role in disease susceptibility (candidate genes) to identify evidence of recent natural selection and to describe the genetic history of human populations. More specifically the research will use patterns of nucleotide variation at two malaria resistance candidate genes, intercellular adhesion molecule-1 (ICAM-1) and CD36, in a diverse group of African and non-African human populations. The project, which is largely funded by an NSF Doctoral Dissertation Improvement Grant, will be the first study of nucleotide diversity at ICAM-1 and CD36 in an ethnically and geographically diverse sample of African individuals.  Following her PhD trainingGomez hopes to join the faculty at a major research university and she is interested in expanding her career from infectious disease susceptibility to cancer and other complex diseases.

She will be recognized during the AAA Awards Ceremony at the 2010 Annual Meeting in New Orleans. Robert J David (U California, Berkeley) and Wendy Alexandra Vogt (U Arizona) received the honorable mention distinction and will also be recognized at the ceremony. All three will be invited to a luncheon sponsored by AAA and hosted by CMIA during the Annual Meeting. Applications for the 2011–12 fellowship are currently available and students who are interested in applying should contact the AAA Department of Academic Relations at 703/528-1902 ext 1181.