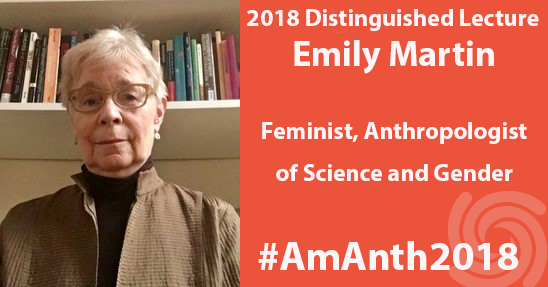 Anthropologist of science and gender Emily Martin will present the Distinguished Lecture at the 2018 AAA Annual Meeting in San Jose, CA.

One of the earliest feminist anthropologists, Martin has combined feminist analysis with ethnographic investigation to explore technoscience, reproduction, the immune system, and psychology.

Martin is the author of six books and more than 100 articles including The Cult of the Dead in a Chinese Village (Stanford University Press, 1973), Chinese Ritual and Politics (Cambridge University Press, 1981), The Woman in the Body: A Cultural Analysis of Reproduction (Beacon Press 1987), Flexible Bodies: Tracking Immunity in American Culture From the Days of Polio to the Age of AIDS (Beacon Press, 1994), and Bipolar Expeditions: Mania and Depression in American Culture (Princeton University Press, 2007). The Woman in the Body and Bipolar Expeditions were honored with the Eileen Basker Memorial Prize and the Diana Forsythe Prize, respectively. She is the founding editor of the general interest publication Anthropology Now and her work has been translated into 12 languages.

In addition to serving on the Board of Directors of the Social Science Research Council and as president of the American Ethnological Society, Martin has taught anthropology at the University of California, Irvine, Yale University, Johns Hopkins University, Princeton University, and New York University. Her research has been supported by Fulbright awards, a Guggenheim fellowship, an American Council of Learned Societies Fellowship, and grants from the National Science Foundation, the Social Science Research Council, the Wenner-Gren Foundation, and the Spencer Foundation. In 2015, she received the Society for the Anthropology of North America Prize for Distinguished Achievement in the Critical Study of North America.

Register here to join us in San Jose!