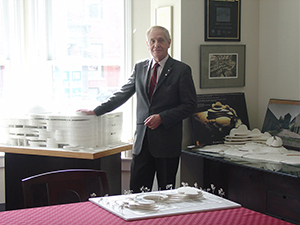 A conversation with Douglas Cardinal, a renowned Canadian architect of Métis, Blackfoot/Kainai, German, and Algonquin heritage, will open the 2019 AAA/CASCA Annual Meeting in Vancouver, BC.

Douglas Cardinal’s life is dedicated to creating beautiful, thriving, harmonious environments. As an architect he designs buildings, as a planner and activist he builds communities, and as a leader and philosopher he builds bridges between disperse cultures all over the world.

Cardinal's architectural studies at The University of British Columbia took him to Austin, Texas, where he acquired scholarships to study at the renowned School of Architecture at the University of Texas. There, he found an intellectually stimulating and socially invigorating environment where he benefited from actively involving himself in the many human rights initiatives ignited in the United States in the late 1950s and early 1960s. This commitment to bettering human conditions continues to be one of the major principles of his architecture.

Cardinal is a forerunner of all philosophies of sustainability, green buildings and ecologically designed community planning. His architecture springs from his observation of Nature and its understanding that everything works seamlessly together. Cardinal believes that the practical needs humans have for architecture also need to include beauty if we are to achieve true sustainability and harmonious communities.

In recognition of his principled design accomplishments, Cardinal has received many acknowledgments and awards including: 14 Honorary Doctorates from several universities in Canada and the United States; an appointment to Officer of the Order of Canada, the greatest honour Canada as a nation bestows to its citizens; the Gold Medals in Architecture by the Royal Architectural Institute in Canada and the Union of Architects of Russia; and honorary fellowships in the Society of American Registered Architects and the Royal Incorporation of Architects in Scotland.  Cardinal was also named “World Master of Contemporary Architecture” as a Professor and Academician by the International Association of Architects.